For young kids coming from Slipknot and Lamb Of God, Suicide Silence are a revelatory kick in the ass. Faster and heavier then most of their contemporaries, they open the doors to extreme metal to a whole new generation, blown away by their explosive live shows. Since the days when they were only a MySpace sensation Suicide Silence have developed exponentially, as we can hear from their lastest effort "No Time To Bleed", who define them as a pillar of the actual american heavy metal scene. We talked about it with the new bass player Dan Kenny… 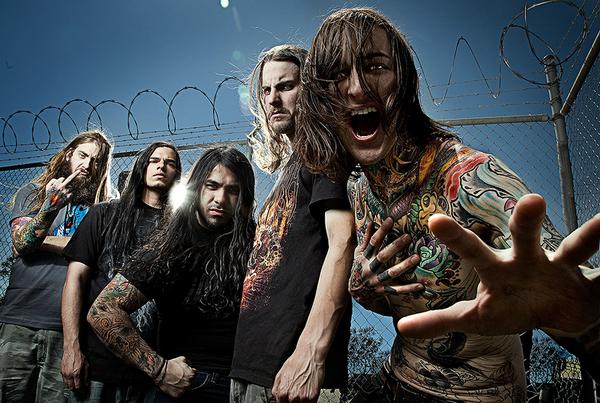 YOUR DEBUT ALBUM WAS THE HIGHEST SELLING DEBUT IN CENTURY MEDIA HISTORY. HAVE YOU EVER FELT UNDER PRESSURE FOR “NO TIME TO BLEED”?
“Yes in some ways and no in some others. Positive confidence made everyone relax with the pressure. There was some feelings of nervousness, hoping the album would be up there and succeed to expectations. Once we made the charts and did really well it was kinda a relief that the wait and anticipation was over”.

IN WHAT WAY DO YOU FEEL SUICIDE SILENCE HAS IMPROVED SINCE “THE CLEANSING”?
“I feel the songs have been written better and progressed. I am the new bassist so i think i add a new element to the band. “No Time To Bleed” is still brutal and catchy but i just think its more mature compared to ‘The Cleansing'”.

OTHERWISE, WHAT DO YOU THINK YOU NEED TO ACHIEVE FIRST?
“I think we are doing really well. I think we should just keep touring and keep gaining more fans”.

AREN’T YOU AFRAID OF BEING TRAPPED IN YOUR OWN STYLISTICAL SOLUTIONS – BREAKDOWNS AND HEAVINESS?
“No, It is what we play and enjoy playing. We could add different styles combined in the future. But, knowing how much stuff we can do doesn’t make me feel trapped”.

HOW CAN YOU IMAGINE AN EVOLUTION OF YOUR SOUND?
“I can imagine the songs getting better and better. It can always get heavier and heavier i say”.

I LOVE THE FACT THAT “THE CLEANSING” WAS RECORDED LIVE IN STUDIO: DID U DO THE SAME WITH THE SAME WAY WITH “NO TIME TO BLEED”?
“No, the band recorded the traditional way with instrument after the other. With a couple tricks in there for different sounds. Some add-on later stuff”.

WHY THERE’S AN ALTERNATE COVER FOR THE EUROPEAN MARKET?
“I think it was to give the European market somethings else. Also, having different covers is bad ass”.

IS THERE ANY DIFFERENCE IN THE WAY YOU LOOK OVERSEA?
“I don’t look at the European market any different”.

THE “SURPRISE EFFECT” AROUND SUICIDE SILENCE IS NOW OVER: DO YOU FEEL YOUR PATH IS LED UPHILL?
“Absolutely, you put in enough effort it pays off”.

WHAT ARE YOUR THOUGHTS ON THE TERM “DEATHCORE”?
“I think ehhh whatever, i don’t mind it. If categorizing makes it easier for people to classify the types of metal you like or dislike then so be it”.

THE VIDEO FOR “WAKE UP” IS DEFINED AS A “DISTURBING LOOK INTO THE INNER PSYCHE WHILE EMBRACING THE EFFECT OF HALLUCINOGENS”: IS YOUR WILL TO EXPLORE HEAVINESS ALSO THROUGH THE ART OF VIDEOCLIP?
“Sure, its another way of portraying your art”.

THE ‘CANADIAN CARNAGE’ TOUR [WITH SLAYER, MEGADETH AND MACHINE HEAD] IS MAYBE THE BEST WAY YOU CAN POSSIBLY HAVE TO PROMOTE YOURSELF: HAVE YOU GOT ANY SURPRISE FOR THE AUDIENCE?
“We already did this tour and it went really really well. The surprise we had for the crowd was our music and stage show because some of the crowd didn’t even know who we were at all”.

YOU ALSO ANNOUNCED AN EUROPEAN TOUR WITH CALIBAN AND EMMURE IN NOVEMBER 2009, WHAT DO WE HAVE TO EXPECT?
“Expect new songs being played live, an awesome stage show and sound. Also, of course, expect to see a lot of headbanging”.

WHAT’S THAT CARAFE WITH A RED JUICE IN THE ARTWORK OF YOUR TSHIRTS?
“HAHAHA its an old character called the “Kool-Aid Man.” He was the mascot for the juice drink called Kool-Aid. Google it haha”.

THE “SUPREME DEDICATION” GALLERY IN YOUR MYSPACE IS PRETTY IMPRESSIVE: HOW DO YOU REACT TO THE LOYALITY OF YOUR FANS?
“I think its awesome. If a band affects you that much, and you want to tattoo it…go ahead, fuck yeah! I myself have an Immolation tattoo taken from one of their album covers. I guess you can call myself having supreme dedication to them”.